Coronavirus Note: Blog posts made during the sheltering-in-place period of the coronavirus crisis are meant as a virtual escape. As things reopen, some posts will incorporated the new situation in places being written about. However, you are advised to check each destination's website for the most current information. Hopefully, all information posted here will be of use to you when it is safe to travel again. 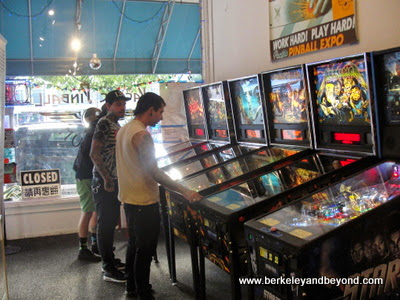 This non-profit hands-on museum attracts a variety of people.  Many like to view exhibits and learn more about these intriguing machines, but most also want to play.  Fortunately, admission includes unlimited play on more than 100 of the colorful machines that are spread through a warren of rooms.  Three jukeboxes are also on free play.  It can get noisy.


I toured the museum with founder Michael Schiess, and what a trip it was!  Here’s what I learned.  Though the idea of pinball started in France with rolling a ball up a hill, pinball machines are mostly an American thing.  The first pinball patent in the U.S. was in 1869.  The first coin-operated pinball machine, the Whiffle, came along in 1931.  The World’s Fair Jigsaw is the all-time best seller at almost 80,000; runner up is the newer “Adams Family,” at about 24,000.  When Oakland banned pinball in the 1930s as gambling, many of the machines found their way to Alameda where rules were more lax.  Flippers were added to the machines in 1947, and artwork became more important in the 1960s.  Between the 1950s and 1970s, pinball machines actually made more money than movies! 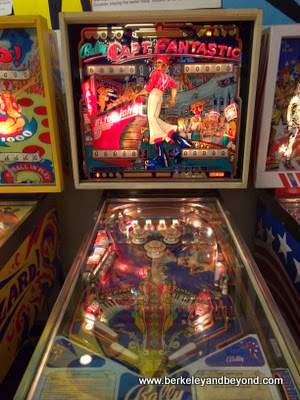 The machines are still evolving, with TV screens added in 2000 and a “CSI” model added in 2008.  The museum’s collection now is at around 1,000, and the 900 that are warehoused are rotated in and out so you never know for sure what you will see.


More things to do in Alameda.

Things to do in nearby Oakland.

Posted by Carole Terwilliger Meyers at 11:17 AM