Dating back to 1893, this is the oldest and largest German restaurant on the West Coast.  It was closed for a while, but recently reopened with new owners. 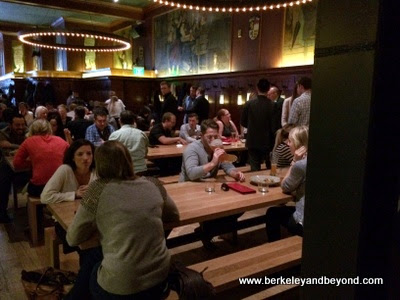 The open, updated interior includes a beer hall with communal picnic-style tables in the front, which is separated from a more formal restaurant in the back by floor-to-ceiling, see-through black mesh curtains.  Decor highlights include massive circular chandeliers that mimic those I’ve seen in German Oktoberfest tents, a large display of vintage steins through which you can view the open kitchen, and cleaned-up original dark wainscoting and Herman Richter murals from the 1930s.  On the Friday evening I visited, the front was packed and hopping with an after-work crowd.  Many people crowded around the vintage rosewood bar and others sat at tables drinking enormous boots of beer (they come in 2 and 3 liters).  The back dining room where I sat was more subdued.  Though the food is clearly described as modern Cal-German, it seems that many diners complain that it is not traditional German.  I loved the seasonal pickled vegetables that included carrots, cauliflower, little cocktail onions, and shredded fermented turnips.  And though I liked the spaetzle, it was actually more like a corn salad, with teeny tiny little spatzels the size of corn kernels mixed with actual roasted corn kernels and some ricotta. 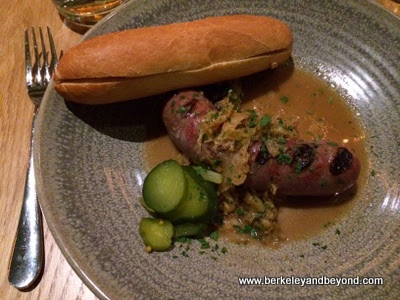 Bratwurst comes with sauerkraut, sour pickles, and hot mustrd, plus a soft roll that is perfect to sop up the sauce; but I noticed too late that my particular brat was undercooked (be sure to always check any sausage anywhere before you eat it). 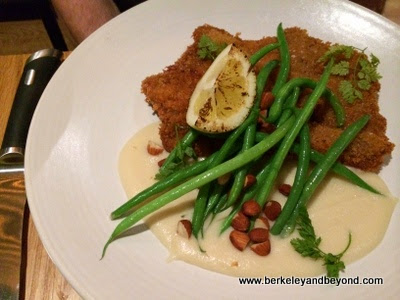 Wiener schnitzel was crispy but could use more flavor. 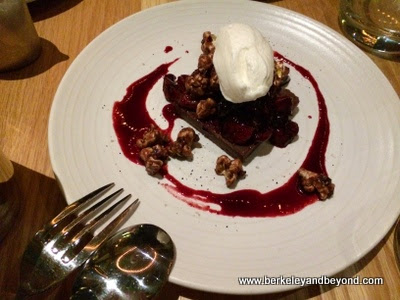 The Black Forest dessert, which I desperately wanted to be the traditional Black Forest Cake of my dreams, was in reality a few delicious cherries and carmel corn mixed with a kirsch reduction atop a slab of dark chocolate.  Next time I’d like to sit in the front with the smallest boot and try the potato pancakes, which I hear are a must, and the sauerbraten, which I hear is coming soon.

More things to do in San Francisco.

Way more things to do in San Francisco.

Posted by Carole Terwilliger Meyers at 11:01 AM